For four years Adam has been at the helm of all things Marketing, from a company rebrand, to supporting the Sales team and posting news articles. Here Adam highlights his favourite things about working for Internet Videocommunications and his deep regret at not introducing himself to Vic Reeves.

How long have you been working for Internet Videocommunications and what do you do?

I’ve nearly hit my 4 year anniversary at Internet Videocommunications. I’ve heard rumours at the 4 year mark you get fully inducted into the background society and get to learn all the secret handshakes etc. We’ll wait and see. I’m the marketing Executive and have an extremely wide range of responsibilities from keeping the Website up to date to changing the odd lightbulb in the office. 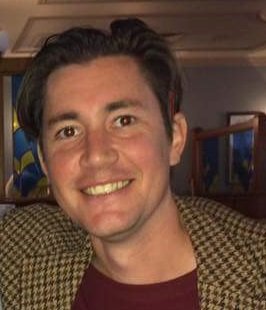 What’s your favourite thing about working for Internet Videocommunications?

It’s an often used answer but I’m going to have to say the people as it’s absolutely true. It makes work a whole lot easier when you get to share it with genuinely nice, helpful and funny people, even when under pressure.

What do you see as being the next big thing in the industry?

I’m the guy that tries to simplify the explanation of the technical aspects of what we do, (mostly out of necessity for myself so I’m not constantly staring blankly) so don’t expect anything too clever or even currently possible. With that in mind I’m going for full blown holographs.

When you are not working what do you like to do?

There’s so much I used to like doing. Playing Football, tennis, running, playing music, cooking, watching movies, but now I’ve got 2 children under 4 years old the answer would have to be sleeping and pretending I cant hear my wife when she asks me to change a nappy. I do love spending time with the family though. It’s what it’s all about.

Name three famous people you would like to have dinner with and why?

Reeves and Mortimer – They count as one in my book. I was brought up watching big night out and while I love most comedy, anything surreal really gets to my core. They are the masters. I once saw Vic in an antiques shop in Hastings and was too scared to say hello. This dinner invite will make up for that.

Donald Trump – The only caveat is his pudding will be laced with truth serum. Then I can see if he’s really how he’s perceived in the media at the start, then post pudding get all the hard hitting stuff out of him.

Derren Brown – I’m not really fussed about the showy stuff he does but am fascinated in how he can read people’s tics and lay suggestions on people. Definitely no poker at the end, but I could also use him on Trump should the pudding fail. Maybe Derren could even implant some silly ideas in his head like climate change is real.

Side Note: Sommelier / host would be Alan Brazil as I’m sure he’d set the set the right tone and get us suitably well oiled. We'd have a talk by Brian Cox then entertainment would be provided by Stewart Lee followed by the reformed Oasis then we’d all settle down and watch In Bruges in a hot tub.

What talent do you wish you had?

If we’re talking possible I’d love to be a master of multiple languages. If we’re talking outside those realms I’d love to have similar brain power as Bradley Cooper in the film Limitless. For those who haven’t seen it, he takes a pill that allows him to use all of his brain and it allows him to be become an expert at whatever he wants to, whether writing, martial arts, and probably even beer brewing and Audio-visual installation (though that isn’t in the film). The sad thing is I bet rather than having time to make use of it, I’d probably just be snowed under with people asking me to do their DIY jobs.

What’s the best advice you’ve ever been given?

Don’t stop yourself from doing something for worry about what other people are thinking or fear of looking silly. We only get one go round.

From my Grandad Jack (He was awesome)